Welcome on this site of saxophonist Gerlo Hesselink.

My new quartet CD “Meant For You” is released ! 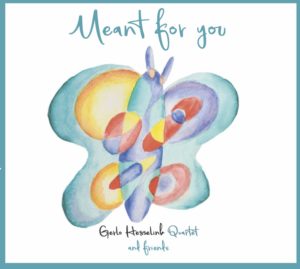 The new CD of the Gerlo Hesselink Quartet is a tribute to son Jan Hesselink, who died 5 years ago. Guest contributions are from Han Hesselink (piano), Chris Muller (piano) and Florieke de Geus (vocals). Most of the pieces are related to him, such as “Song For Jan”, written by Chris and Florieke. In addition to own compositions, the CD contains songs by Kenny Wheeler, Toots Thielemans and Pat Metheny. The title song  “Meant for You” was composed by Dick Oatts:
“I wrote for anyone who might feel particularly vulnerable in that given moment. It was for people who have a hard time expressing their sorrow or grief. This tune was written to express an unabridged sadness with an open heart so it can heal or forgive. A tune that was dedicated loss but having no hesitation in how you express it “
For a video of the recording of this song see : https://tinyurl.com/4yndrz32

You can order the CD in my webshop.

CD-album “Garden of Stones“. It is an album with my jazz quartet together with Dirk Balthaus (piano), Henk Zomer(drums) and Johan Plomp (bass). Besides five of my own compositions, there are compositions made by Dirk Balthaus, Henri Gerrits, Keith Jarrett, Astor Piazzolla and Enrico Pieranuzi. With the player above you can hear snippets of some of the songs.

The CD is received enthusiastically on the CD release tour and in the reviews by the press .

“A wonderful album, an album where goed taste is predominant” (Ton Ouwehand, 12-5-2013, http://www.overuit.nl/jazzfestival )

“I feel that Gerlo Hesselink is a wonderful compositional improviser and his music reflects an interesting new direction.
Gerlo’s alto sound is inspiring to me. His music and playing is meant to reflect and move forward at the same time.” (Dick Oatts, 28-10-2013)

You can order the CD in my webshop (Netherlands) or at CD Baby (international). Digital it can be bought on CD Baby too, but also on iTunes. Also on streaming platforms, like spotify.