My musical career started in Almelo as 10 year old child on clarinet at the local harmony ‘Eendracht’. On my 16th i got my alto saxophone and i became interested in  jazz/pop music .

During the study in Enschede I played a lot with very different bands including several local big bands. Together with bassist Johan Plomp I Dual City Concert Band began at that time, which I still occurs regularly. I have no conservatory training  but had lessons from several well-known saxophonists such as Ferdinand Povel and Dick Oatts. 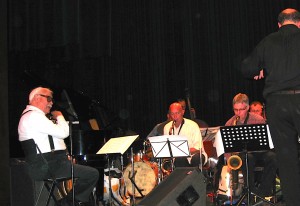 At the moment I’m quite active as (jazz) saxophonist. Through my extensive big band experience, I am a regularly asked substitute in various orchestras throughout the Netherlands (including the Metropole Orchestra) but also in Germany. Besides saxophone I play flute and clarinet. Meanwhile, I have accompanied many internationally known artists such as Toots Thielemans, Benny Golson, Randy Brecker and Deborah Brown. As a soloist in these for

mations, this resulted in soloists-prices at the Big Band Festival 2008 in Hoofddorp and a year later during the Dutch Big Band Contest 2009 in Enschede.

I am/was also active in several small(er) instrumentation, with musicians like Peter Tiehuis, Hod O ‘Brian and Johan Plomp . I can also be heard as a substitute for musicals and other theater productions, as in “Songs from the Heart” by Simone Kleinsma and  “La Cage Aux Folles”. I

At the moment I am a member of Get The Funk, Dual City Concert Band, Millennium Jazz Orchestra, JazzArt, the Ramblers the Holland Big Band, Learning To Fly Project and Demi-Seq.

In 2013 i recorded my own CD titled “Garden of Stones” with a quartet  consisting Dirk Balthaus, Johan Plomp and Henk Summer and myself. This album is released may 7th 2013.